Star Citizen is an upcoming space simulation game by Cloud Imperium games. It is a first-person, massively multiplayer online game that lets you explore the vast universe on your computer screen. A single-player version of the original Star Citizen was also released and named Squadron 42.

The game is set in the year three thousand and beyond so you will see a lot of different advancements. Although the development of the game started in 2012, there is still no clear release date from the developers. This article features a detailed comparison between Star Citizen and Eve online in terms of story, gameplay, and various other aspects.

The story starts when you join the famous Squadron 42 as a new recruit. Squadron 42 is a legendary volunteer unit of the second fleet of the navy of the united earth Empire. This unit is assigned to the UEES Paul Steed (CV 023). You will spend time in this unit and progress through its ranks by earning experience points and leveling up. You need a minimum rank to earn the official citizenship of the United Empire of the earth.

As the game is still in its development phase, there are no clear details about what the exact gameplay of Star Citizen will look like. The future gameplay may look similar to various other space simulators with advanced space shooting mechanics. You will upgrade space ships with Star Citizen AUEC, but skills will also play an important in deciding your win at the end of the day.

Developers have provided the gaming community with hints that the game will feature various game types ranging from a single-player campaign which gamers can enjoy while bringing offline to an online multiplayer world. If you are an experienced space explorer, use the private server option to enjoy the game with selected features only. Use advanced tools to create mods for private servers, but these mods will not work in the original Star Citizen game.

When it comes to engaging in fights with enemies on spaceships, piloting is one of the most important skills, and you can turn the tide of the battle in your favor with the right skills. Don’t forget to balance between getting a good ship and increasing your piloting skills. As soon as you engage in a fight, you will send it to a virtual battleground with an option for nearby ships to conveniently enter and exit the battleground with a simple click. The battleground supports more than one hundred ships at a time.

To reduce the load from the game server, Star Citizen implies the dynamic instancing option and equally divides battlegrounds on available servers. According to Chris Roberts, who is the lead developer of Star Citizen, the game doesn’t feature any character stats, and the only thing which decides your win or loss is your skills and ship. Ships, on the other hand, have their weaknesses and strengths, but you can overcome them by upgrading them.

To provide players with the best open-world experience, the game features simple yet enjoyable flying as well as trading missions. If you do everything according to the plan, you don’t have to grind for credits or buy them from third-party websites.

EVE Online is a spaceship online role-playing game where players decide their path and set on a space adventure. It is a community-driven game that is known for its realistic player-vs-player as well as player-vs-environment battles. It takes space exploration to a whole new level. The economy of the game is largely player-based. Participate in various activities and professions in this space game.

Become a warrior to defend your planet or a politician to do something good for the community. Go to the market and trade goods to earn some profit. Take the easy way out and earn money by becoming a space pirate to loot other space ships. It features a massive universe with more than seven thousand star systems that you can explore. Choose from a massive arsenal of more than three hundred advanced ships developed by some of the best spaceship companies in the universe.

The game is set in more than twenty thousand years ahead in the future, where the technology is much more advanced compared to the current times. Humanity has already destroyed the earth and used all its resources, so they now opted to live on various other planets of the galaxy. You will mainly engage in fights with enemies for resources and control over the given planet. Humanity was using a wormhole to travel between new and old space colonies, but it was destroyed later, and this created chaos in the universe. Many colonies went extinct, while those who survived were faced with new challenges. You will be dealing with those challenges during your adventure.

As with other role-playing games, you start with creating your character if you are new to the game or can import a previously created character. Create your EVE Online account to save a maximum of three characters at the same time and use them whenever you want. There are a total of four playable races in the game, including Caldari, Minmatar, Gallente, and Amarr. After choosing the race, you have to choose from three available bloodlines to start your adventure. Various copies of the game are available on the internet.

Flying spaceships is what you will be doing most of the time in the game. When you want to log out, just find a nearby dock station and park your spaceship there. Combat in EVE Online takes in real-time, which means you will be dealing with other real players. You can’t just pause the game and rethink your strategy. Engaging in combat doesn’t open all closed doors to ship features for you. You can’t simply aim weapons at enemies manually. You can only find a target and lock it onto it, and everything else will be done by the computer. MMOpixel offers complete packages of spaceship along Star Citizen AUEC at the best price.

10 Tips and Tricks to Play Minecraft Like a Pro 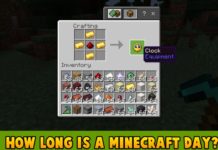 How long is a Minecraft day?

How To Top Up 1 Diamonds And Get Goldrim Tribute Thompson...